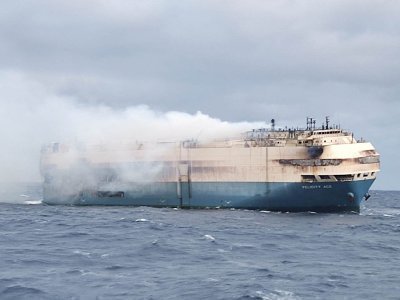 Carrying 3,965 Porsche, Lamborghini, Audi and Bentley cars at a value of around $US330M, the Felicity Ace caught fire in the Atlantic Ocean in February this year. Luckily, all 22 crew members were safely rescued but the abandoned ship was left drifting and burned for over a week before recovery teams could board. It ran aground while being towed to safety and finally sank beneath the surface of the Atlantic Ocean. Whilst the initial cause of the fire hasn’t been established, it’s clear that the Lithium-ion batteries in the electric vehicles on board helped keep the fire alive.

Lithium Batteries In Use

One ingredient in Lithium batteries is highly flammable, and if the temperature rises above a certain point, it can experience thermal runaway, emit dangerous toxic smoke vapours and can explode.  Subsequent reignition is possible due to lingering toxic, flammable vapours in the air.  Fires which ignite from these highly condensed energy battery packs burn longer and stronger than non-electric car fires.  They are much harder to extinguish, take more smothering agents to extinguish, and can potentially melt the entire metal frame of the car.

Lithium batteries are also widely used in homes and a new standard was introduced in 2019, AS/NZ 5139 2019, which provides a set of rules designed specifically to guide the safe installation of residential battery storage systems. It details seven hazard categories and more than 110 risk management factors that need to be considered when installing residential battery storage.

Lithium Batteries In The Workplace

The batteries are also used in workplaces in small and wearable electronic devices that rely on a power source that stores a high amount of energy in a small space. Lithium cells provide sustained power and often have the capability to recharge.

Interestingly, Australia is the largest producer in the world of lithium, contributing up to 50% of the world’s lithium mine/concentrate. However, we basically dig for the raw materials and ship them overseas for refining, cell production and battery assembly.

We need more information to quantify risk. The US Occupational Health and Safety Administration reports that lithium batteries are generally safe and unlikely to fail so long as there are no defects or damage. When lithium batteries fail to operate safely or are damaged, they may present a fire and/or explosion hazard. Damage from improper use, storage, or charging may also cause lithium batteries to fail.  So controls are warranted.

The US Occupational Health and Safety Administration recommends: